And where did UO’s money go? The ODE has a hint, here. $3 million a year in new costs, recurring. We pay Jamie Moffitt $290K a year, recurring, to control this sort of thing. Instead she’s lecturing the faculty about how much science start-ups cost. 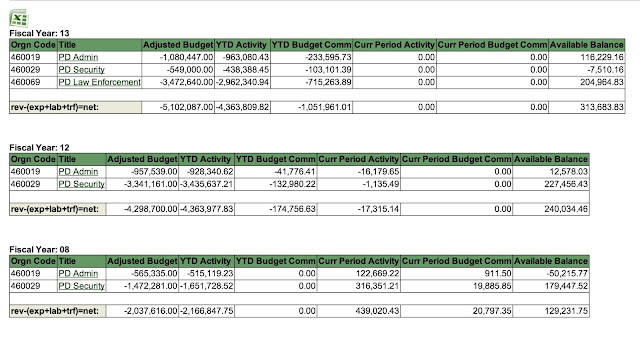 The NYT has a discussion following up on the decision by Spellman to shift the money from a few “student-athletes” to general personal wellness programs. 4/23/2013.

According to the link here. Dental hygienists make 69K? Worst career choice: Newspaper reporter. I’d take this with a grain of salt. 4/23/2013.

Monday 4/22/2013 is the last day to volunteer for appointments, and to run for the Senate and elected committees. List of who has volunteered so far is here.

The electronic form will be active for two weeks starting today Monday, April 8, 2013.

WE WANT TO KNOW WHAT YOU HATE!

So much that we made this hate document!

Now is your chance to unleash your hatred at/for/via the Oregon Commentator! FREE SUDSY T-SHIRT FOR THE BEST HATE ESSAY

Well-grounded hate is quintessential because its ugly alternatives are blind acceptance or forced compromise. This current trend in society to discourage or even denounce hate in its essence spells danger for the United States. We must not only keep in mind but assert the importance of upholding the right to hate, just as we have the right to free speech. As irrational or discomforting as it may sound, everyone has the right to feel how they feel. As a former Commentator once said:

Sticking your head in the clouds and pretending the world is always a beautiful place may be appealing, but it is not reality.

The link goes to a google doc where students can help write the story. And don’t forget to check out the Journal of Hate Studies.

Report That Blamed Shrinking Faculty Workloads for Rising College Costs Is Retracted. From the Chronicle. 4/18/2013.

4/15/2013: Mark Thoma of the UO Economics department and The Economist’s View blog considers the possibility in his talk on academic blogging, given at a Kaufmann Foundation conference Friday: 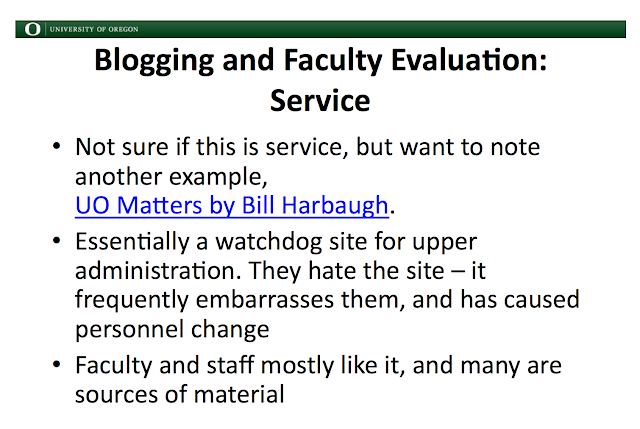 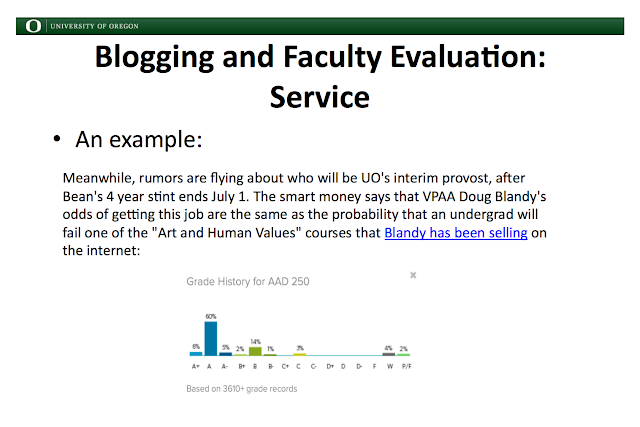 I’ve been claiming UO’s Randy Geller has been paying Sharon Rudnick $400 an hour to run the administration’s negotiations with the faculty union. This was based on documents her HLGR firm gave Marion County Judge Thomas Hart, when they and Randy Geller were trying to get him to agree to double-charge the DOJ for Frohnmayer and Gary’s public records case over the consulting deal for Kitzhaber’s girlfriend. Long story, Pulitzer Prize winner Nigel Jaquiss had a piece about it in Willamette Week, here: 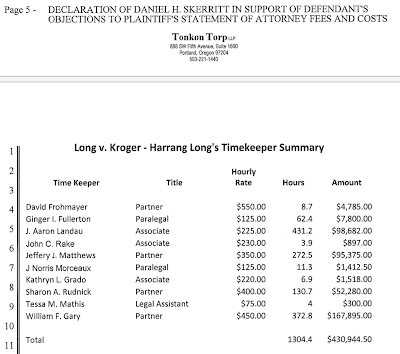 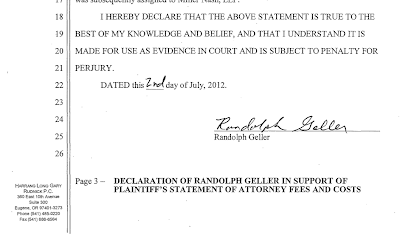 But in the latest UO invoices Rudnick’s rate is given as only about $300 an hour. (Frohnmayer and Gary’s rates are only $260 and $295 respectively, instead of the $550 and $450 they charged the DOJ, and got the Deschutes County taxpayers to pay them for their unsuccessful ethics complaint against DA Patrick Flaherty.)
Let’s assume that $400 really is Rudnick’s regular rate. Maybe she’s giving UO a discount because she enjoys the bargaining sessions as much as I do. Or maybe she just has a big heart, and feels that trimming a few % off the faculty raises is a public service that might help with the karma from her tobacco company work?
But it’s probably better not to dwell on her motives. $100 is a lot of money when you multiply it by all those billable hours. And UO certainly needs the cash to build up its reserves. We should all be grateful to her, and I’ve been trying to think of some way to reciprocate.
Ms Rudnick visibly and audibly lost it in the bargaining session when the union proposed calling her side “the administration”. The AAUP’s Mike Mauer then suggested using “the university administration” instead. While I’m sure Mauer’s intentions were friendly, if anything she now gets even angrier whenever she hears that phrase. I’m no behavioral economist, but I don’t think these outbursts are strategic. They can’t be good for building a reputation as a level-headed professional negotiator. And now the UO Senate has joined the nomenclature war, on the faculty union’s side.
A little set theory implies that the word “administration” is her trigger. So help me make peace between Rudnick and Mauer. Anyone have a good synonym for “administration” to suggest? I’ll make up new buttons, and give one to the reader with the best idea.

From a professor in Texas, naturally. Meanwhile, an English language institute in Georgia gets in trouble over its innovative internship program. 4/15/2013.

Nebraska got the boot at the AAU’s 4/10/11 meeting, and Jim Bean announced he’d hired their Associate VP for Research away from them on 4/13/2011. Of course Nebraska did manage to keep the AAU vote secret for a few weeks. I wonder when Espy told Bean about it. 4/12/13.

4/11/2013: The people have spoken. More importantly, three of them have offered to help restock my depleted scotch reserves if I would drop the Disqus comment block. I was holding out for another bottle from Bean, but he took a UO junket to Oxford and brought me back nothing from World of Whiskies duty-free. Anyway, I’m going to be spending a lot of time screening spam about big penises and small mortgage payments:

The paper says the higher spending on instruction at unionized public universities might help explain the finding that such institutions have significantly better student success rates, as measured by the share of students who graduate within six years, earn degrees, or complete some other academic program. 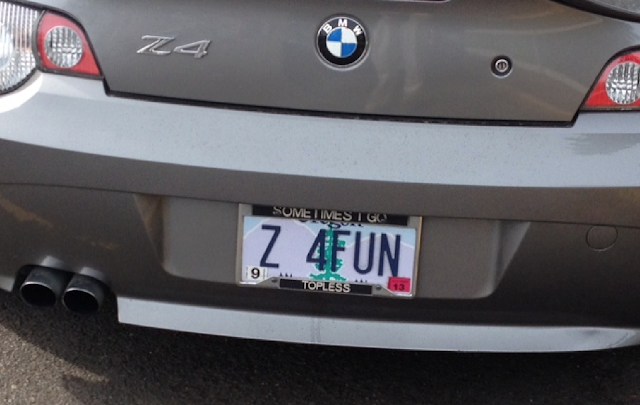 That would be President Mitch Daniels at Purdue. Fascinating piece on his surprising first few months in Insidehighered, here. 4/4/2013.