Around the O has the report:

… A recent estate pledge from Jim and his wife Mary — an estimated $5 million — is a step in the right direction.

“This was a way to help out in return for what the school gave me,” said Rothwell, who worked 26 years at Callison, then one of the nation’s largest architecture and design firms. Rothwell served as CEO and board president before leaving the firm in 2011. He now lives in Colorado, where he designs homes.

The Rothwells have included a gift in their estate for the School of Architecture and Allied Arts endowment. Most of the contribution will fund a faculty chair in architecture; the rest will support travel scholarships, facilities and a discretionary dean’s fund.

Around the O has the good news here:

Thanks to a $16 million estate gift for scholarships, scores of high-achieving UO students on the path to becoming public school teachers will be spending less time worrying about debt and more time focused on becoming outstanding educators.

The R.H. and Jane Logan Scholarship program is for students with financial need who seek a degree in education and intend to teach in public schools. The endowment will generate $640,000 annually in scholarships for freshmen and sophomores majoring in pre-education, juniors and seniors majoring in educational foundations (a focus area for elementary education), and graduate students in both the UOTeach licensure program and special education.

Diane Dietz has the good news in the RG here.

6/28/2016: UO gets $6M from Marin Community Foundation to endow family counseling and speech clinic. Andrew Theen has the good news in the Oregonian:

“Our long-term vision is to expand the college’s clinic and capabilities to become the educational and social-services equivalent of a modern teaching hospital,” UO President Michael Schill said in a statement. “This very generous gift is a game-changing step toward achieving that goal.” Services at the clinic average $15 per client, according to the university, giving Eugene and Springfield residents access to therapy at a lower cost.

6/17/2016: University of Oregon gets $7 million gift for science from Fords. Diane Dietz has the good news here.

Update: More in Around the O, here.

Andrew Theen has the good news on this generous gift to support basic science, in the Oregonian here:

The $10 million gift is the largest to the university since President Michael Schill arrived on campus last July, and it comes as Schill has emphasized the importance of increasing the school’s research portfolio and ensuring academic excellence.

Actually, if you think the Ducks are part of UO, as our administrators like to claim, it’s Schill’s third largest gift. Phil & Penny Knight gave at least $20M for the Mariota center (probably more like $40M) and another $13.5M towards renovating Hayward Field.

The largest gift Mike Gottfredson brought in was $10M for a new softball field.

6/15/2014: Diane Dietz has the story in the RG, here. These days a university president’s main job is fundraising, and Gottfredson is not doing well at it. While OSU just wrapped up a $1B academic fund drive, the Duck Athletic Fund continues to use the UO Foundation to launder tax donations for Duck athletics donors, and Phil Knight’s $500M gift to OHSU – which still needs $300M in matching money – is diverting donors away from UO science research, towards giving to help OHSU cure for cancer. I believe the biggest gift announcement on Gottfredson’s watch has been $10M for softball. Seriously.

VP for Development Michael Andreasen has made clear his frustrations with the Duck’s poaching of academic donations, but so far has been unable to put a stop to it. Maybe Lillis – a generous donor to UO academics – will be able to convince Gottfredson, or better yet a new President, to get UO priorities straight. The Foundation endowment is currently about $880M. They won’t say how much is for sports. Gottfredson’s Chief of Staff Greg Rikhoff is claiming UO doesn’t have a copy of Robin Jaqua’s gift letter, which the administration claims precludes them from using her donation for the academic side’s Jock Box costs. The Foundation did recently release this totally unhelpful breakdown of recent gifts: 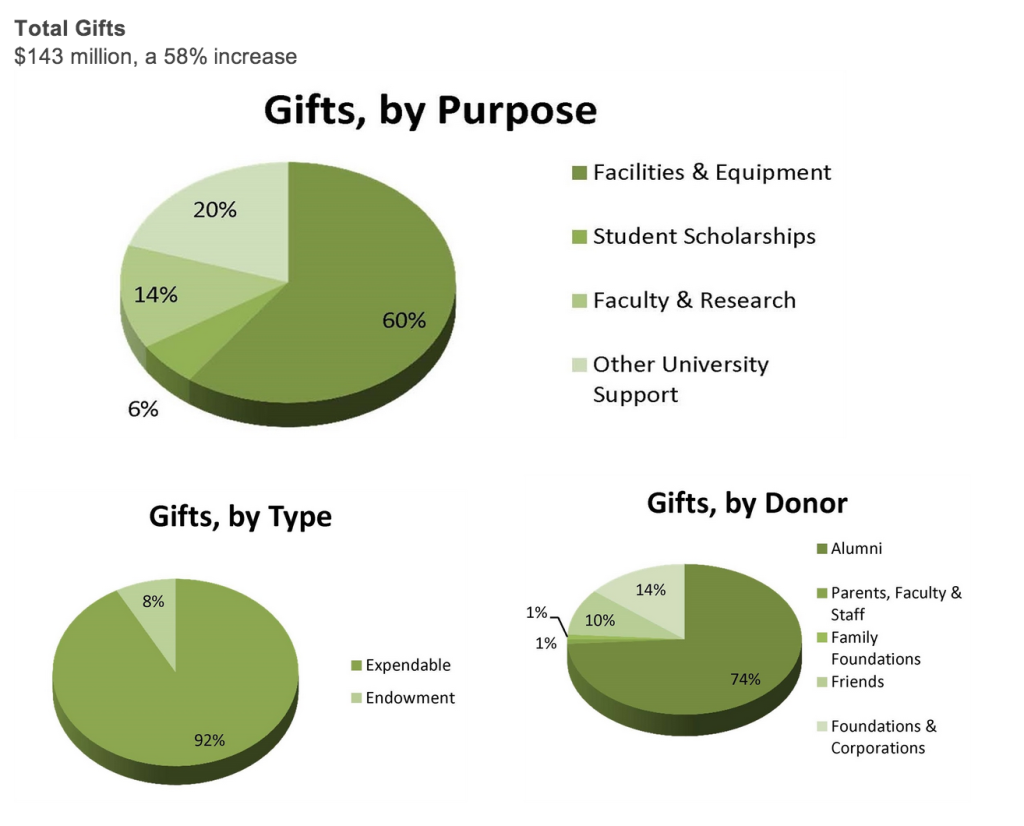 Lillis’s goal is $2-$3 Billion. A large part of that will probably be for buildings and emergency spending on research and new faculty, to try and stay in the AAU. Each $1B in the endowment yields $40M a year. The total UO budget for next year will be about $900M, with about $100M for the Ducks. So $2B in new endowment – if it’s really for academics – would mean a 10% increase in academic spending.

Significant, if targeted correctly. But if it goes to things like Bean’s sports product initiative, it might make for some happy donors, employable students, and wealthy administrators, but the AAU is not going to give a shit.

In other news, the RG has a fascinating report on the growing power of popular revolt to overturn underperforming authoritarian regimes, here.

For donors like Lorry Lokey and Vinton “Slim” Sommerville, Lariviere’s ouster was a stunning blow that no amount of explanation of process and political niceties can soothe. “It’s the governor’s fault and I hope the voters remember this two years from now and knock him out,” said Lokey, the founder of the Business Wire news service who has pledged or paid about $134 million to UO.

Lokey said he will wait until spring — when emotions have subsided and when the Legislature convenes — to decide on the future of his gifts to UO. “I’m not in a position to say what I’m going to do,” said Lokey, a Stanford University graduate who grew up in Portland. “I don’t know. I want to wait six months to see things evolve.”

Lokey, a University of Oregon Foundation trustee, said it was essential for the Legislature to approve an independent governing board for at least UO. “If it all works out, great,” Lokey said, a California resident. “I’ll be glad to pledge even more money.”

Donors are too smart to give their money to Pernsteiner, which is essentially what happens now.  He reacts to UO’s success by cutting UO’s state allotment and funneling the money to EOU, WOU, SOU, and IOU – after a tithe for George’s personal expenses, of course. Thanks to a reader for the link.

Almost two-thirds of the money raised during the 2010-11 fiscal year was
for academics. Donations for academics totaled $73.3 million, and
athletics donations totaled $43.6 million.

4/3/2011: Well at least someone around here is getting a raise. Must need it to match the extravagant style UO’s Development office administrators expect to become accustomed to in their new office palace. These people have no shame, spending donor money on this instead of research space, classrooms, faculty offices, etc. Last I heard raising the remaining $5 million for fitting out this building with fancy but tasteful furniture and acres of flat-screens was #1 on the development office’s priorities list. Who sets UO’s priorities?

The final beams and superstructure of the Cheryl Ramberg Ford and Allyn Ford Alumni Center were set in place recently by construction crews. … The four-story, 60,000-square-foot center — being built just west of the Matthew Knight Arena — is scheduled for construction next May. The $32.5 million project is being paid for with private gifts and state bonds. … The building will also unite the UO Alumni Association, Office of Development and University of Oregon Foundation staff under one roof. … Private gifts will pay for $22.75 million of the construction costs, and $9.75 million will be funded with state bonds. The university is continuing to raise $2.5 million for the project.

When loyal UO donors ask where their money is most needed, they are now told that the number one and two priorities are the “Athletic Legacy Fund” and this palace. People who would happily have given to academic causes are not told about needs for departments, classrooms, chairs, scholarships, etc. Instead they are told that their gift can buy a named conference room in the Alumni Center.

So far as I can tell, the faculty has no real input into deciding the prioritization lists of the Development office. Does anyone know differently?

Update: a reader writes in the comments:

I suppose UO Matters doesn’t remember the Campaign for Oregon – when Dept heads and Deans spent a lot of time assembling projects and proposals for donations. These were used in the campaign for Oregon. But who chose what to pitch? I think that is the core of the problem. In the end, academics got about half of the funds raised. The other half? Athletics.

This is an example of Pournelle’s Iron Law of Bureaucracy:

And a rebuttal from “alumni and staff member”

In regards to the Alumni Center and Campaign Oregon, I’d like to say that without the work of Development Officers and the commitment and generosity of UO alumni and donors, we’d be unable to support many student scholarships and programs on campus. With an Alumni Center (we’re the only school in the pac 10 without one), the UO will only be able to raise MORE money for scholarships and important academic programs. http://giving.uoregon.edu/why-give