The surprise announcement, never floated publicly before Friday, was revealed when Kitzhaber unveiled his budget plan for 2013-15.

If his plan flies, he will have personally selected all the key executives and board members running the main segments of Oregon public education: early childhood, public schools, community colleges and universities.

University System Chancellor George Pernsteiner, whose office would be cut back to help launch the new department, said he first heard about the plan just a week ago. …

Actually there was a lot of talk about this last year. Good to hear the Governor has made the first incision.

From Diane Dietz in the RG on the proposed bill. Read it all, if just for the insulting Matt Donegan quotes. 10/5/2012.

to take public comments, this Thursday: 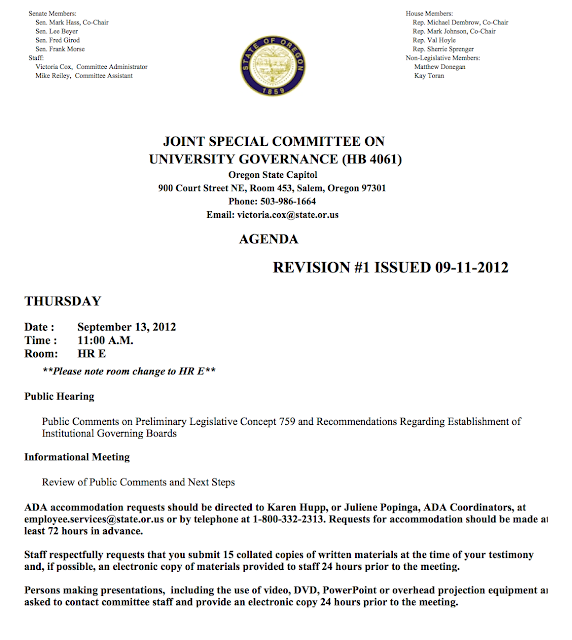 Update: As a commenter notes, this post is pretty far off base. More here, I hope more accurate.

Out here in Oregon our state board fires presidents when they *do* raise faculty pay.

UVA Rector Helen Dragas writing on the Board of Visitors’ decision to fire UVA President Teresa Sullivan on a Sunday, less than 2 years into her term:

We have calls internally for resolution of tough financial issues that require hard decisions on resource allocation. The compensation of our valued faculty and staff has continued to decline in real terms, and we acknowledge the tremendous task ahead of making star hires to fill the many spots that will be vacated over the next few years as our eminent faculty members retire in great numbers. These challenges are truly an existential threat to the greatness of UVA.

Quoted here by the always informed Channel 29 news team. Dragas’s explanation is direct, knowledgeable and coherent. Quite a contrast to the nonsense we got from Matt Donegan and the OUS Board when they fired President Lariviere. And yes, I take it as evidence in favor of the New Partnership’s independent UO board proposal. (Thanks to a longtime C’ville insider for the tip.) 6/10/2012.

Update: 6/1/2012: Colton Totland reports in the RG that OUS has figured out how to pay for Provost Bean’s beamer and sabbatical, and Pernsteiner’s mortgage too. Still no plan from UO to increase faculty hiring or build new classrooms. Pathetic.

The University will submit it’s proposal for a 6.1 percent tuition increase for resident undergraduates amounting to $459 hike from the 2011-12 academic year. Non-resident undergraduate rates are proposed to raise by only 3.6 percent, but due to a higher base number, the dollar amount is larger landing at a $945 hike on an already expensive $27,653.

In totally unrelated news BMW announced price increases last month. The costs of taking your family to away games has also shot up, and maid service on an 8,200 sq ft house is never cheap.

Bill Graves has more in the Oregonian, including some tricky stuff on student health insurance fees at PSU. ODE editorial here.

Two new OUS board appointees. From Bill Graves in the Oregonian:

Gov. John Kitzhaber appointed both Middleton and Forbes to the board and reappointed Jim Francesconi,  a Portland attorney who has served on the board since 2007, to another term.

In December he appointed a WOU professor as one of two faculty members, the other is from OSU. There hasn’t been a UO person on the board for maybe 5 years – it was Geri Richmond. Kitzhaber does still have two more slots to fill though. 5/23/2012:

OUS Chancellor George Pernsteiner owns a house in Portland (OUS gives him $26,000 in state funds  to help with the mortgage) and he spends most of his working time at his office at PSU. But he votes in Lane County. He’s been doing this since 2004 – it’s part of the pretense that the state owned Treetops mansion in Eugene is his “actual residence.” In Oregon it’s a felony to make a false statement on a voter registration card:

And Oregon Secretary of State Kate Brown came down hard about voter fraud in the Oregonian:

But apparently that’s the deal for poor people, not the well connected 1% like Pernsteiner.

Last March I filed a complaint with Lane County Elections, asking them to investigate the legality of Pernsteiner’s Lane County registration. Lane County Elections supervisor Roxanne Marshall told me that her office would not pursue a complaint against someone who formally stated that they intended to return to Lane County, someday – no matter how farfetched the claim. It probably didn’t hurt that Pernsteiner hired attorney Bill Gary to write this letter for him. Or that he’s a registered Democrat like Brown, and a big campaign contributor. Or that Gary  is a Kate Brown supporter.

Nice little beach community they’ve got here, and they aim to keep it that way.

From the Amherst Bulletin:

The vice chancellor for academic strategies for the Oregon University System since 2010, Andrews is one of four finalists for chancellor of the state’s flagship campus. She was the last of the candidates to visit the Amherst campus this week.

Chancellor is the UMass system equivalent of campus president. She is currently Dr. Pernsteiner’s point person for the UO president search. My impression is she has a few more bricks in the wheelbarrow than the rest of the OUS crew. I wonder if she has also applied for the UO job, or Kitzhaber’s OEIB job. UMass – Amherst is a considerably bigger job than UO.

A commenter asks why UMass brings 4 finalists to campus, while OUS will only let UO see the one person that is pre-approved by Pernsteiner.

UMass has a handy webpage with bio information on their 4 finalists, here. Who knows, maybe some overlap with UO applicants, but their search is much farther along.

2/1/2012: OUS Board Chair Matt Donegan is still cut up from the Portland fight, and for all his bravado he apparently hasn’t shown his face in Eugene since the meeting where he and Allyn Ford told Lariviere the board had decided to fire him. So Donegan has sent us a washed-up lightweight to take his punches for him. This should be fascinating:

This Friday, February 3rd, the City Club of Eugene will host a debate on the future of higher education governance in Oregon, with Chancellor George Pernsteiner and Acting UO President Robert Berdahl. At the Eugene Hilton at 11:45.

Following the presentations, there will be an opportunity for questions from the audience. Robert Kyr, president of the UO Faculty Senate, will ask one of the first questions. Andrew Rogers, ASUO Communications Director, will ask the other.

This will also be broadcast on KLCC on Monday evening, Feb 6.

The Eugene City Club hosts many interesting talks and is a strong part of Eugene’s civic life. They want more UO faculty members, so do what you can to make this event.

The smart money is on Berdahl – but then the smart money was on Lariviere. Pernsteiner’s a sneaky bastard, with lots of student tuition money and state perks to dole out to his entourage of suck-ups.

1/31/2012: It’s more than 2 months since the OUS board fired Richard Lariviere. Board Chair Matt Donegan told us repeatedly at the Portland meeting that he was confident the board could find a qualified replacement quickly. But Chancellor George Pernsteiner still has not even been able to assemble a search committee. (Though he has hired Kim Morrison and the search firm “Diversified Search”.) We’ve been hearing for 3 weeks now that the committee announcement would be made within a few days. Tomorrow?

The Chief Education Officer will serve as the OEIB’s chief executive in the creation, implementation and management of an integrated and aligned public education system from pre-school through post-secondary education. The initial phase of the Chief Education Officer’s tenure will require visionary leadership, skillful collaboration with legislators, educators, parents and education stakeholders at the state and local levels and the effective engagement of community leaders and citizens to build and implement an integrated and aligned education system.

1/15/2011: The session starts Feb 1. The Oregon House Higher Education Committee is working on a resolution to establish yet another task force, with LC 288:

They plan a hearing 1/19, with speakers to include

The committee also plans to discuss LC 261, which modifies existing law on monitoring of teaching time by professors – don’t see anything about research efforts. Strange.

Then there’s LC 287, which studies allowing students to get Oregon financial aid to take online classes at the Western Governor’s University in Utah. Controversial.

Meanwhile the Lane County delegation plans a public meeting in Eugene on their efforts to make some progress on a UO Board this session:

Senator Beyer and Representatives Barnhart, Beyer and Hoyle will meet with community members, students and faculty to discuss the upcoming February Special Session and other issues raised by the audience. (Due to a scheduling conflict Senator Prozanski and Representatives Holvey may be able to participate, but likely only for a portion of the meeting)

I find it very troubling that there are no Lane County delegates on the House higher ed committee. Combine that with the fact that there are no UO members of the OUS board, and you start to see how utterly isolated we are in state politics.

1/13/2012: This will make 8 years since Goldschmidt appointed him interim, never a search. Full letter here. Bad news for UO. It will be hard to hire a strong president who is willing to work for Pernsteiner. Our best hope now is to get the Lane County Delegation to get some sort of UO Board proposal through the legislature this session. Word is they are working on it. 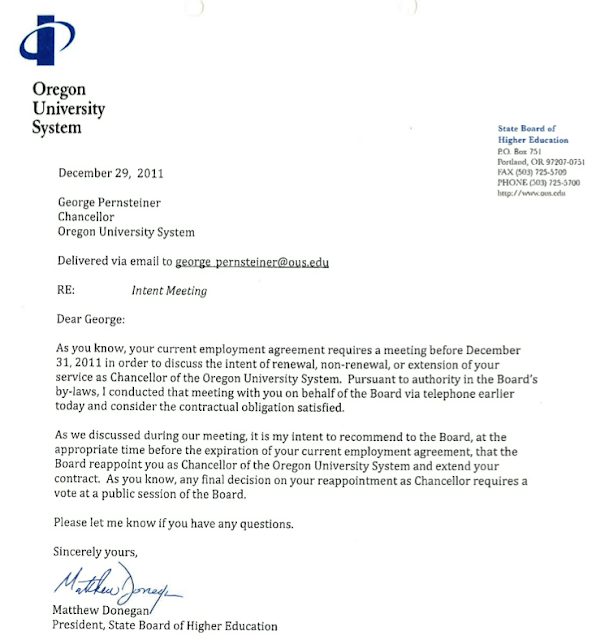 Important to get a big turnout and lots of tough questions – particularly at the Gerlingher reception at 5PM. What are Pernsteiner and the Board willing to promise, in writing, to a new UO President regarding UO autonomy?

Allyn Ford is the OSU alumnus and OUS board member who is chairing the UO presidential search committee, and the donor behind the Ford Alumni Center, a.k.a. the gift that keeps on taking.

Dr. Pernsteiner has the power and incentives to sabotage the presidential search and hire a mediocre toadying suck up – a personality type he is quite familiar with. Here’s your chance to ask him how he plans to do that:

Your participation is strongly encouraged…

• ROBERT BERDAHL, Interim University President will give his inaugural address to the university community and receive questions and comments from the audience.

• GEORGE PERNSTEINER, Chancellor, and ALLYN FORD, Chair of the Presidential Search Committee, will discuss the search for University President and receive questions and comments from the audience.

Please join us at 3 p.m. in the EMU Ballroom for this important event.  The entire university community and the general public are encouraged to attend.

Faculty, staff, and students are also invited to have an informal discussion about the presidential search process with GEORGE PERNSTEINER, Chancellor, and ALLYN FORD, Chair of the Presidential Search Committee.