A University of Oregon summer college prep program for under­privileged middle schoolers ally-ooped a Springfield teenager into the loving arms of Bill and Melinda Gates — who will pay for her college education from freshman year to doctoral degree. …

“Particle physics,” she said. “What I really want to do is go to Switzerland to work with the large hadron collider, smashing particles together at speeds nearing the speed of light in attempts to re-create the big bang.”

Just read the whole story, it captures it all, wonderfully. From Diane Dietz in the RG.

What can UO Matters do at this critical juncture in the search process to create a constructive environment?  How can UO Matters help market the UO to potential presidents?

What can be done now and in the next months and years to foster engagement between the faculty and the administration?

This Calico Cat thinks that all sides have now vented fully and repeatedly; there are no new issues. The question is: how do we escape Wonderland?

Note: these comments seem to have gotten a bit off track. Try here.

5/20/2012: From Ted Sickinger in the Oregonian. I’m no finance professor, but there seems to be a lot of long-run downside risk here for the state – and not much for the investment advisors, who take their fees and bonuses off the top.

There ought to be a law that no press releases can be written by government flacks until government is current in filling public records requests.

This would put quite a crimp in the output of the Duck’s press office.

5/17/2012: That’s the explanation the SacBee gives for the lucrative UO trade in CA students. Complete with Roger Thompson quote. Not a popular argument with the UO central administration, which loves spending that out-of-state tuition money on sports and on their own junkets to bowl games (link fixed) – and then claiming it’s all part of their job to increase enrollment. Tax deductible!

I mistakenly deleted all comments to UO Matters from 5/12 or so til now. I’m very sorry, there were some good ones too! I tried to recover them, but can’t. I really appreciate comments and the discussions that often develop. They make the blog much more interesting and I hope people will keep making them!

PS – will the person that keeps clearing their cache and giving Berdahl A grades in the poll just stop? I get it.

5/14/2012: The average debt for a student graduating with a bachelor’s is about the same as the loan for a new car, and the average return is considerable larger. A lot of graduates have to get an installment loan online to help them pay back what they owe, but it’s not the end of the world, just look what they get in return; excellent career prospects and financial security for life. Of course, there are a few students who are worried about taking out a loan that might be helpful to them due to their lack of knowledge on loans. However, a simple search online for how do payday loans actually work could put them at ease. Sorry, this is not a crisis. There are plenty of shocking anecdotes, which the NYT gives too much play – but they should not drive overall policy. The discussion does have some good ideas:

Congress should change the law so that colleges and universities have skin in the game when they include loans in the financial aid “packages” that hundreds of thousands of college students are receiving as we speak. Right now, a mediocre private college that encourages a student to borrow $100,000 to get a B.A. in art history bears no consequences when that student defaults on her loan, can’t get a mortgage, delays starting a family and endures constant harassment from collection agents. What if the college itself had to reimburse taxpayers for part of the losses?

As we know from Pres Berdahl’s debate with Dr. Pernsteiner at the Eugene City club, UO graduates have the lowest debt of those from all OUS institutions: 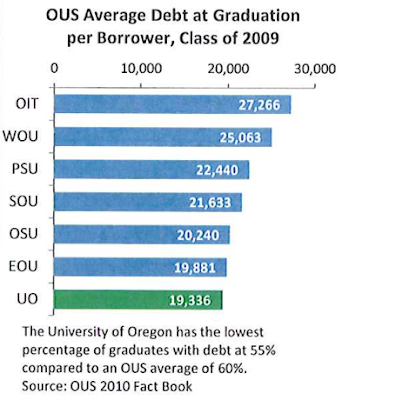 Obviously this pattern is in part driven by rich out-of-state parents paying the tuition with their checkbooks. Thanks for subsidizing our in-staters: I bet the debt results are similar if broken out for Oregon residents. The full Berdahl handout is here.
And as an astute commenter notes, UO also has the highest graduation rate. Imagine borrowing 25K to go to Western and then not even getting a degree.

5/14/2012: From Insidehighered.com on UT student support for president’s plan for tuition increases. The Chronicle suggest he may be fired by the board of regents.  UO’s proposed increases are on this OUS docket, which presumably passed:

In comparison to UO, the UT President apparently has a careful plan to use the increases for academics.

5/9/2012: President Rob Kyr and Interim President Bob Berdahl will speak with the legislative committee on this, 5/10/2012. Agenda and remarks here.

5/8/2012: The Eugene city council has just voted to give UO $400,000 a year. How’s that? The upscale downtown Capstone apartments will get a $800,000 annual tax exemption from the city. These are aimed at wealthy out-of-state students, for whom UO competes regionally, nationally and internationally. Parents shop around, looking at the cost of tuition plus living expenses across UO type universities. If we assume the elasticities of supply and demand are equal, half the $800,000 exemption will go towards higher profits for the developers, half to lower rents for the parents. UO can now raise total out-of-state tuition by $400,000. Sweet! Not that I’m an economist.

5/8/2012: 15% of Americans now get food stamps. According to this story in the Chronicle, the proportion of people with advanced degrees getting food stamps or other federal assistance has tripled since 2006 – to about 1.5%.

5/4/2012: Back in 2007 President Frohnmayer and Charles Martinez were putting UO through their expensive and pointless “5 Year Diversity Action Plan” mess. Meanwhile a group of 22 other universities started an evidence based program to improve college success among low-income and minority students. Their results have started to come in – mixed – but something to build on.

New UO VP for Diversity Yvette Alex-Assensoh starts this summer, I am hoping she moves UO away from unproductive rhetoric and the expensive and illegal UMRP program, and towards “fill the pipeline” programs targeted at low SES students such as those supported by the Education Trust.

5/3/2012: In the Oregonian: Kitzhaber saves Oregon budget and his reputation in health care deal with Obama administration