10/30/2009: Carl Malamud announces he is posting more legal documents from the Oregon DOJ, despite John Kroger’s assertion that they are copyrighted. From Boingboing.net.

People ask me all the time “who is The Dog?” I honestly don’t know. He/she seems smarter than the average dog, but that is true of many UO faculty, and administrators too. 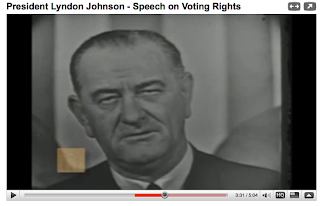 LBJ slept around, drank whiskey, got rich selling his influence, and lied a lot even for a lawyer. Then one day he gave the best speech in American history. Four minutes before Congress gets over the shock and realizes they need to applaud. “… and should we conquer the stars, but fail at this cause, then we shall have failed as a nation …” Take that pretty boy Jack. Two months later they passed his bill. Even the southerners voted for it – because he had them by the balls. Oh yeah, we landed on the moon too.

9/1/2009: The staff here at uomatters.com tries to keep focused on numbers. UO’s numbers are really fascinating, sometimes even actionable. Just ask former Provost Moseley. But every now and then something like this comes across the screen:

The University athletic department told Duck cheerleading advisors Laraine Raish and Corine Lewis they were being let go at approximately 8:30 a.m. Monday. The mother and daughter were part-time advisors to the program and not full-time coaches, according to the athletic department.

from reporter Ben Schorzman, at the UO Daily Emerald. OK, so the cheer squad needed to sex it up a little, maybe to satisfy the fat old white guys behind Kilkenny’s $69 million media contract, so we dumped the mother daughter act? Not exactly the stuff of scandal. But wait. Sometimes it’s not all numbers. Actually, 7% of the time it’s not, if you want to be exact. So check out the comments, which are way, way NSFW. Not that UO General Counsel Melinda Grier is monitoring your internet use. I hope not, anyway. But doesn’t the Emerald censor these? Is this was Thomas Jefferson was thinking about? OK, when he wasn’t thinking about Sally Hemmings, that is.

8/6/2009: From the Oregonian. Combined with the tuition increases and with likely enrollment increases, UO is apparently in very, very good financial shape. It will be interesting to see how Lariviere spends the money.

Governor Ted Kulongoski today followed through on his plans to veto a last-minute budget cut to the state’s public universities.

The restoration of $13.4 million in general funds that Legislators cut in the final hours of this year’s session helped most universities keep tuition hikes to under 10 percent.

Tuition hikes for full-time undergraduates from Oregon will range from 3.5 percent at Eastern Oregon University to 15.4 percent at the University of Oregon, this fall over last fall. UO’s annual tuition and fees will be $7,428, the highest in the system.

7/27/2009: The Portland planning commission and UO have agreed to continue negotiations on the $1 million dollar UO-Portland sign, putting off a decision on this bizarre episode until Sept 14. ODE article here.

7/14/2009: Washington is way ahead of Oregon in terms of public records access. Their law is not that different, but their DOJ actually enforces it. As an example, a reader sends UW’s budget report. Getting this level of detail from Francis Dyke – if she could figure it out – would take forever and she would charge the person requesting it hundreds of dollars.

7/14/2009: I’m no economist, but it’s hard to read the email below without thinking Lariviere has just pulled off a real hat trick with the OUS Board. Even after discounts recent tuition increases have got to bring in about $20 million a year. The cut in state funding seems like it will be no more than $9 million. So is UO in fat city now? Can anyone explain if there’s something wrong with my math?

The following message is forwarded on behalf of Senior Vice President and Provost Jim Bean:

Last Thursday and Friday the State Board of Higher Education met in Portland. As a result, we can share two important new pieces of information. Tuition increases were approved. For UO undergraduates they are 7.5% for resident students and 12% for out of state (see http://www.ous.edu/news_and_information/news/071009.php for full detail), increases vary by credit hours registered). Given the current economic conditions in Oregon, we are concerned about the impact of these tuition increases on our students and their families. For that reason, we are holding back 30% of all increased funds over inflation for financial aid. This will require sacrifice since the pool of funds from increased tuition will be smaller than the funding lost from decreased state appropriation, even net federal stimulus. This aid will be distributed based on student financial need through the PathwayOregon Program and normal FAFSA processes.

We also learned of the overall state reduction to Higher Education. It is limited to about 11% due to the planned gubernatorial veto of additional legislated cuts to the Higher Ed budget. However, we will not know how that is distributed to individual universities until October.

This leads to the second important point of the email. We feel that waiting until October to process contracts is unfair to the great staff and faculty at this institution. Therefore, we will process all expected contracts beginning today and hope to have them done by the end of August. We feel that we have enough information to do so prudently. The decision to issue contracts is guided by the principles established earlier – that we will do everything possible to protect faculty and staff salaries and increase financial aid for students during these difficult economic times.

Thank you again for helping us get through this difficult year. We have a couple more ahead of us, but we are well positioned to come through this stronger relative to our peers.

Alex Tomchak Scott of the ODE has a clarifying article on Lariviere’s decision to reverse Frohnmayer’s decision to move finals to the week *after* graduation so that none of that unpleasant education stuff will interfere with the NCAA Track meet. Beans’s recent email to the faculty tried to attribute Lariviere’s decision to the argument that the NCAA was considering shortening the meet. I think he was thinking that admitting otherwise would mean acknowledging the original move was a mistake. Apparently UO administrators don’t make mistakes. But Nathan Tublitz is quoted as saying Lariviere decided to change it back to signal that academics comes first. So next spring when you students are spending those beautiful days in the library trying to grok the eigenvalues of the Dolbeault complex for Hermitian manifolds, remember it’s Lariviere’s fault. Back when Frohmayer was President, spring at UO was all about naked frisbee (mostly SFW).

It is highly likely that the NCAA will be moving
the date for the national championships back
to the previous week as a result of streamling
the regional quals. I don’t believe the decision
for the UO to reverse itself has anything to do
with athletics vs academics, but everything to
do with logistics.

Do you have any inside knowledge on this?

Suzanne Pardington at the Oregonian writes a story about the OUS Board voting to let UO raise tuition 7.9%.

7/5/2009: The RG has an editorial about Lariviere here. (With the apparently obligatory sloppy kiss to Frohnmayer.) There’s some vague talk about faculty salaries – but nothing specific on how he plans to deal with it, beyond some statements about how the sciences and professional schools have done better than the humanities in terms of funding – I assume he doesn’t mean better in terms of salaries. There are no specifics about what he is willing to sacrifice to get the money to increase salaries – not that this would be expected in a piece like this. We hope he begins with a serious re-examination of Bend, Portland, OIED, and the 5 new Sustainability big ideas. Interestingly the last UO President who tried to deal seriously with the salary problem at UO was Paul Olum, president from 1980 – 1989. The OUS Board fired him. The RG editorial on that is here – it’s interesting reading. The board has known about the salary problem for a long time – and they’ve spent UO’s money on many, many other things instead. Even if Lariviere himself is serious, he may have a tough time convincing the board this should be their #1 priority! 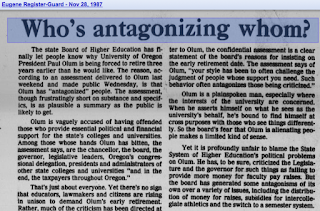 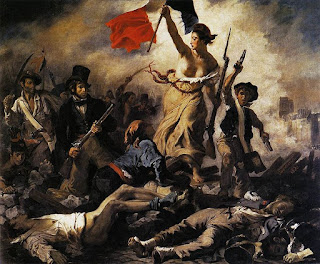 6/16/2009: No responses yet to our public records requests for data on the Bend program losses, the $3 million on Johnson Hall remodeling, and we are still waiting for copies of Frohnmayer’s retirement contract and Lariviere’s contract – presumably meaning that they are still haggling out the details with OUS. We really hope that Lariviere is insisting on getting it in writing that the OUS board will not allow Frohnmayer to meddle in his decisions.

6/8/2009: After a year on the job Provost Jim Bean discovers – from a news article in a Missouri student newspaper we posted here – that UO’s faculty are the lowest paid in the AAU. This is after he wasted a huge chunk of IR and Senate time trying to defend UO’s excessive salaries for administrators – including his own. Better late than never. The good news is the Lariviere quote – but of course Frohnmayer has promised the same thing ever since the Senate white paper came out in 2000: faculty salaries were his “top priority”. Right.

(A comment points out that Bean knew this already – he’s writing this email to make it sound like he is “shocked to discover…”. )

The Missouri article stating that UO has the lowest salaries in the AAU has caused quite a stir (we have since verified that they were correct). Low salaries were always thought of as just Oregonian. But 34 out of 34 is a whole other thing. We cannot have this. Richard’s reaction was “this is job #1.” Richard will likely have an announcement on how we are attacking this when politically feasible (after last gavel). Please communicate to your faculty that the Missouri article really got our attention. This may require disruptive solutions.

Steve Duin at the Oregonian has a post about this. In related news, on Friday the OUS Board approved emeritus status and a new contract for Frohnmayer. We’ve requested the contract, and should soon know how much we have to pay Frohnmayer to finally get him to stop being President.