Went down to buy a laptop. Dozens of happy parents and students and parents milling around, stocking up on tech stuff. Staff handling it all very professionally, and chatting up the parents too. Very nice.

today. He hasn’t got out of Johnson Hall much yet, so it will be interesting to hear what comes from this. 9/19/2012.

9/20/2012 update: Turns out he did not show and was not on the agenda. Jamie Moffitt stood in for Johnson Hall. Step up your game, secret sources.

The presidents of Oregon State University and  the University of Oregon are
instructed to work with each other and to pursue within the Northwest region, the Pac-10, and the NCAA appropriate cost containment measures such as grants based only on need, fewer grants, reduced recruiting efforts, smaller coaching staffs, and other appropriate measures.

If such efforts, over a five-year period, are unsuccessful, the Board will reassess its position and instruct the University of Oregon and Oregon State University whether or not to implement those cost containment policies even in the absence of Pac-10, NCAA, and regional action.

The lighter side of those jokers on the NCAA infractions committees:

Effect of athletics on donations to academics

UO IAC retreat material. These are annual meetings of the IAC and principals in UO athletics and other UO administrators who deal with athletics issues. Typically held in September.

That would be chancellor H. Holden Thorp of UNC. The Chronicle reports he was worn down by the usual athletics scandals and one involving fundraising. I wonder if universities ever count this sort of administrative cost of dealing with big-time college sports as part of the athletic department’s overhead? 9/18/2012.

Craig Pintens and UO’s other well paid hypesters are starting to sound a little shrill. Bob Welch of the RG started it off last week with this nicely written column:

The excess. “In a word, that’s how I’d sum it up,” says Darrel Linker, 68, of Springfield, who says the UO is “alienating” its fan base. “New buildings, ticket prices, uniforms. The athletic department is getting ahead of itself.” … “It’s like, ‘We can do whatever we want to do and it doesn’t matter,’ ” Hoard says.

But I believe it’s starting to matter.

On 9/17 Welch added more and explains that reader response to this was 61/62 in support of his argument.

Meanwhile, after fighting the ASUO for months trying to extract a few more $100,000 in student fee money for tickets, the Ducks are now giving them away, to try and fill Autzen for the TV cameras. Rob Mullens has now abandoned his efforts to pretend Matt Court can be self-supporting, slashing many season tickets by 50%.

Maybe the enthusiasm will come back later in the fall, maybe it will drop more when the brain damage news gets worse and we find out more about Kelly’s NCAA violations, but at the moment the meme is not good. Don Kahle followed up the Welch piece with this. And a correspondent sends this, regarding UW:

Transparency is, again, the issue in Pac-12 football, as a 2012 Pulitzer Prize-winning institution posits, “UW Football should remember it’s part of a public institution.”

The editorial is a follow-up to an item reported earlier in the week that UW was prohibiting media from reporting on practices. “This continues a trend of
limiting media access to the program, as UW cut this year from four to
two the number of practices open to the media…” Apparently, UW is merely bringing their secrecy standards up to date with other Pac-12 schools, with Oregon included in the list.

Ideally, the only way people will learn about their gridiron warriors is to buy a ticket and show up on gameday. But, really, why would anyone want to know what goes on in a football program outside of gameday…I mean, really? 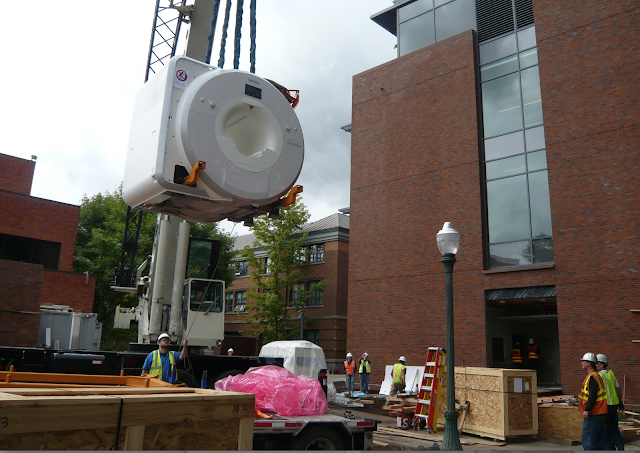 Brian Smith is departing F&A for a big promotion at the UCSD medical school. Another AVP, Laura Hubbard, left last fall to be VP at SUNY Buffalo after she didn’t get the UO VP job. The UO search failed and Moffitt, who’d been on the search committee and was not an applicant for the job, was appointed by Lariviere. 9/10/2012.

That’s the rumor overheard Saturday night down at the opening of the Faculty Club’s new Lariviere Smoking Lounge:

“Seriously, it’s a brilliant move, gives me a little hope for this place. Mullens looks out for his people – he got his coaches 21% raises and bonuses, they didn’t even need a union, and he’s building them new offices too. He’s a creative fundraiser, and Phil Knight trusts him. Bean, on the other hand, well he’s had his shot at the job, and spent most of his time looking out for #1. This year he’s up for a performance review, and he knows what happened to Tomlin. Geller is meeting with Gottfredson Monday, says he’s got a plan to ease Bean out quickly. Something about a Provost Emeritus appointment …”

That’s all I know, they started whispering when the waiter came by to refill my scotch.

Discounts for the faculty? You know that had to hurt. They’re cheaper on stubhub, but it’s the thought that counts. The JH administrators get in free of course. Well, free to them. The academic budget gives athletics $375K for 80 seats, part of the secret Frohnmayer/Kilkenny deal. 9/5/2012.

It takes much more than good coaching to build a winning program. The success of our student-athletes in the classroom is just as important as their victories on the field. As members of the University of Oregon faculty and staff, you all make immeasurable contributions to the lives of our student-athletes, and we would like to show our appreciation.

To take advantage of this offer, click this link http://bit.ly/UOFacStaff and enter in the code FSDUCKS

Thanks for your support,

We had a post a while ago about how the Ducks were auctioning off football game jerseys to cover their mounting deficits. LaMike was not amused. But now it’s used women’s soccer team shorts – complete with certificate of authenticity. Surely there’s a classier way to pay for the UO administration’s family Rose Bowl junkets?  9/4/2012. 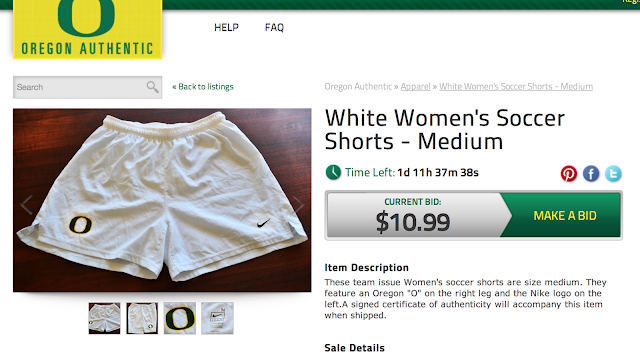 per week, last 52 weeks. The spikes are the Lariviere firing and Gottfredson hiring. The most popular recent document downloads are Randy Geller’s resume and Robin Holmes’s EMU election plan. 9/4/2012.

The Ducks may be a money loser for UO’s academic side, but they’ve been a gold mine for ambitious area sportswriters. A few years back ODE reporter Ryan Knutson turned his exposes of Kilkenny’s Matt Court arena financing scheme into an associate producer job at Frontline. Last week George Schroeder of the RG moved up to USA Today, while last year Rachel Bachman turned her investigative reporting for the Oregonian into a job at the WSJ. Her Grid of Shame is here. Thanks to Bojack for the link. 9/1/2012.